What is the water column? 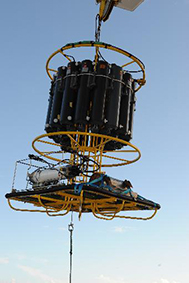 The water column is a concept used in oceanography to describe the physical (temperature, salinity, light penetration)  and chemical (pH, dissolved oxygen, nutrient salts) characteristics of seawater at different depths for a defined geographical point. The water column extends from the surface to the bottom of the ocean and may reach 11 km in depth (Mariana trench in the Pacific). The physical and chemical characteristics determine the distribution of living organisms in the ocean. At the surface, sunlight provides photosynthesis and the deeper we go, the darker and colder the environment becomes (2°C at great depths). Only organisms capable of resisting the increase in pressure (1 bar per 10 m) may survive and develop here.

Physical and chemical characteristics may vary from one ocean to another but also according to different forcings such as horizontal and vertical currents or the effect of exterior elements which may create chemical anomalies. Studying the water column provides understanding on the links between living organisms and environmental parameters, large-scale water circulation and the transfer of matter between water masses.

How do we study the water column?

Various different oceanographic instruments are deployed depending on the study. Generally, vertical profiles are made of temperature, salinity, chemical parameters at a defined point along the water column. Vertical profiles are often made along a section traced at the ocean surface thereby obtaining a 2-D view of the distribution of the studied parameters.

The profiles are acquired using a CTD probe whose main function is to detect how the conductivity and temperature of the water column changes in relation to depth. When combined with temperature data, salinity measurements can be used to determine seawater density which is a primary driving force for major ocean currents.

Other instruments and sensors are often associated with the CTD to obtain data on dissolved oxygen, the presence of particles, fluorescence and even currents.

We also use experimental sensors to measure trace metals (iron for example) in real-time or dissolved gases.

Why do we study the water column at Marine Geoscience?

Fluid seeps (hydrothermal sources and cold seeps) release plumes which create chemical (e.g. iron, manganese, methane content) and physical (salinity, temperature, particle) anomalies in the water column. The intensity of these anomalies depends on the distance from the source. The aim is therefore to follow the anomalies to the source taking into account the currents which condition the dispersion of the plume.

Once the source is located and identified, the study of the plume in the water column will provide us with knowledge on its impact on the chemistry of seawater and the immediate environment and to calculate the flow of matter and heat released from the sources in relation to subjacent geological processes or even to identify modes of dispersion of larvae living near the sources.